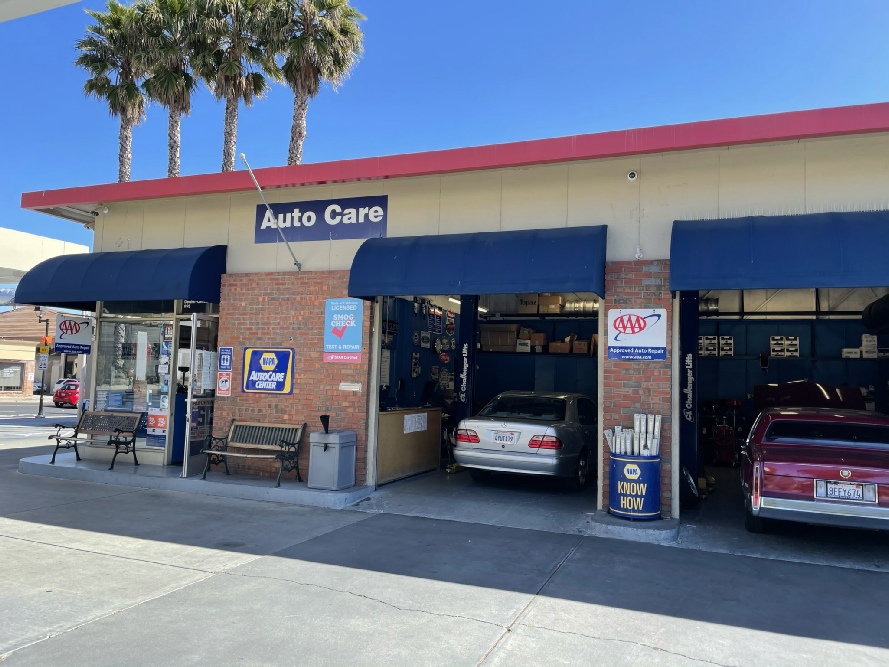 After retirement, I have found myself involved in several new hobbies. One of my new endeavors involves the relatively new hobby of 3D printing. In case you don’t already know, 3D printing is a newer technology that uses a “3D printer” to create plastic models and such using a plastic infusion method of laying down layers of molten plastic on a flat surface to create designs and models from CAD drawings.

If you would like to learn more about 3D printing, read my blog here.

The goal of this particular project was to design and build a scale model of the local 76 gas station. I’ve purchased gasoline here for the last twenty years or so and the owner and his son are helpful and friendly people. It isn’t common to see a gas station made out of brick, which is one of the factors that inspired me to go forward with this project. And, as gas stations go, this station is certainly one of the more “photogenic” gas stations around.

The model was designed to be “HO” model train scale (roughly 1/87 to 1). Because of the scale of the model, the overall dimensions of the model needed to be truncated a bit in order for the printer to print it. So, the third mechanic’s stall was omitted.

Before starting, I took several photographs of the station with my camera. Then, I spent time designing each individual component in a CAD program. Shown above is a CAD drawing of most of the various parts that will need to be printed out along with the appropriate filament color for each part. Each part will be printed out separately. One of the more difficult aspects of creating the design is ensuring that the relative scale of the parts is the the same (or close to being the same). It’s much more difficult than it may seem at first glance. 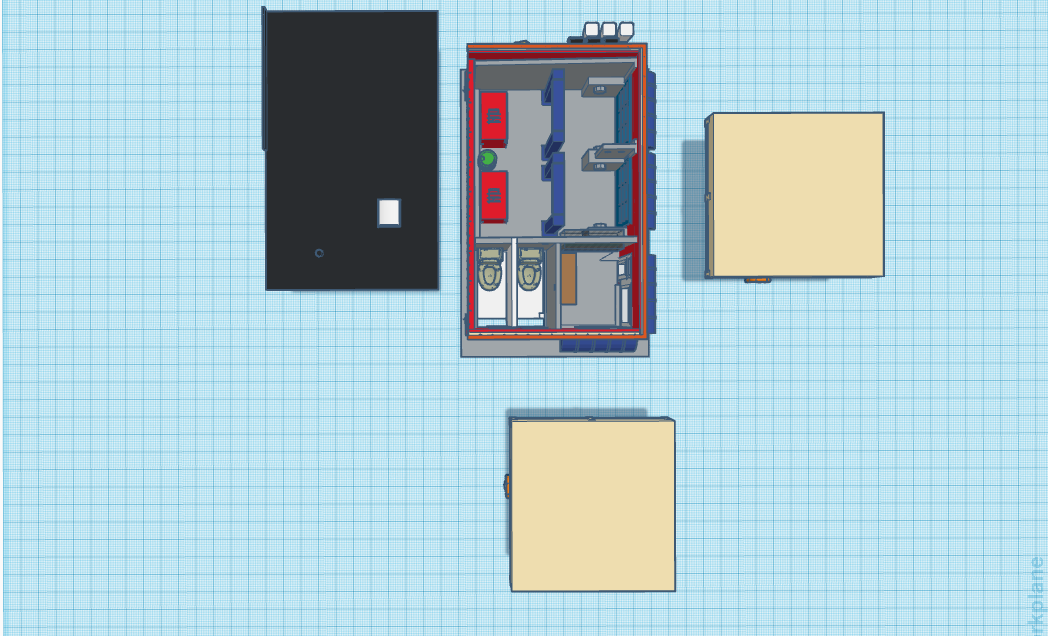 This is a “bird’s eye” view of the model, showing some of the internal parts that will be included in the model. 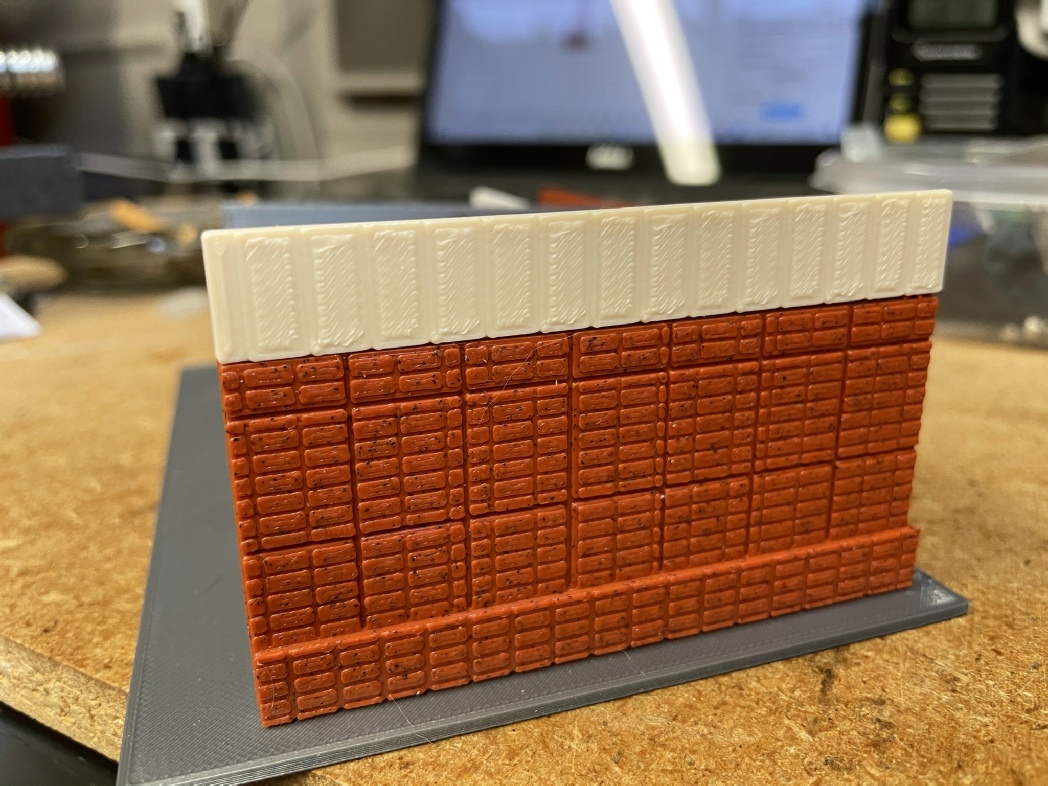 As they say “A journey of a thousand miles begins with a single step”. This will be the right side wall and the floor of the service station. As 3D printing gains popularity, more styles, types and colors of printing filament are becoming available. I found a new filament color called “Brick Red” that is a dull red with some random darker colors in it which simulates brick color and texture fairly well. I used the 3D CAD designing program to “etch” out the individual bricks to provide a more realistic look to the brickwork. The upper fascia was also “etched” in the design to simulate the vertical slats in the upper section of the wall. The floor was printed using a dull gray filament to simulate concrete. 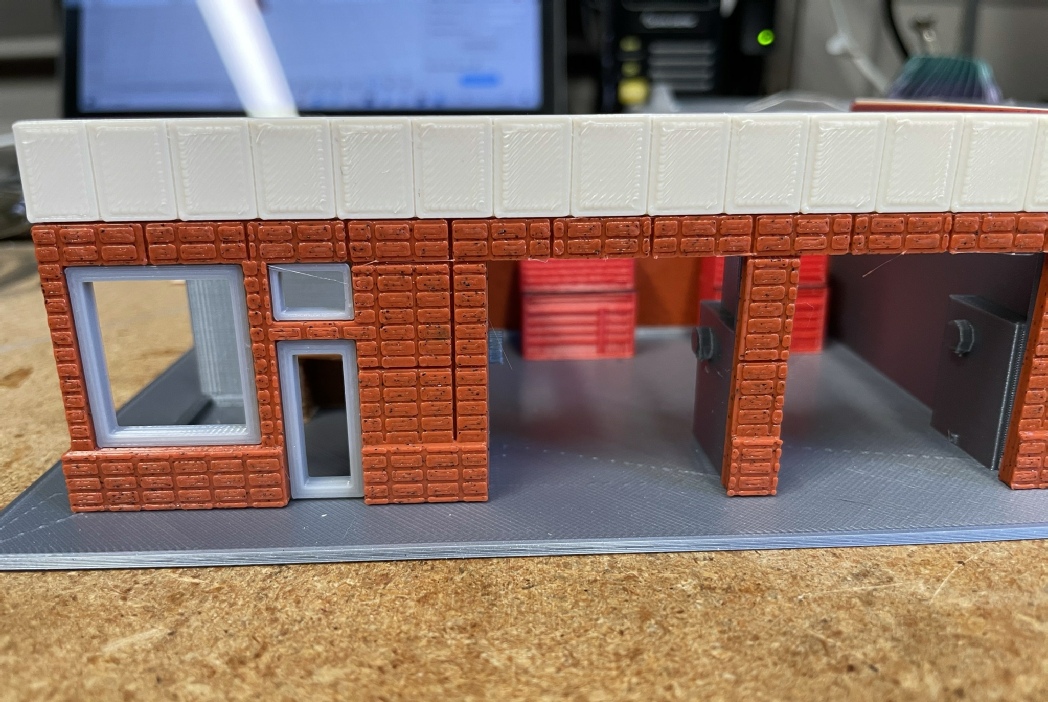 This is the front fascia of the service station. Some of the inner walls have been installed and the front office door and window frames were printed out in light gray filament and glued into place. 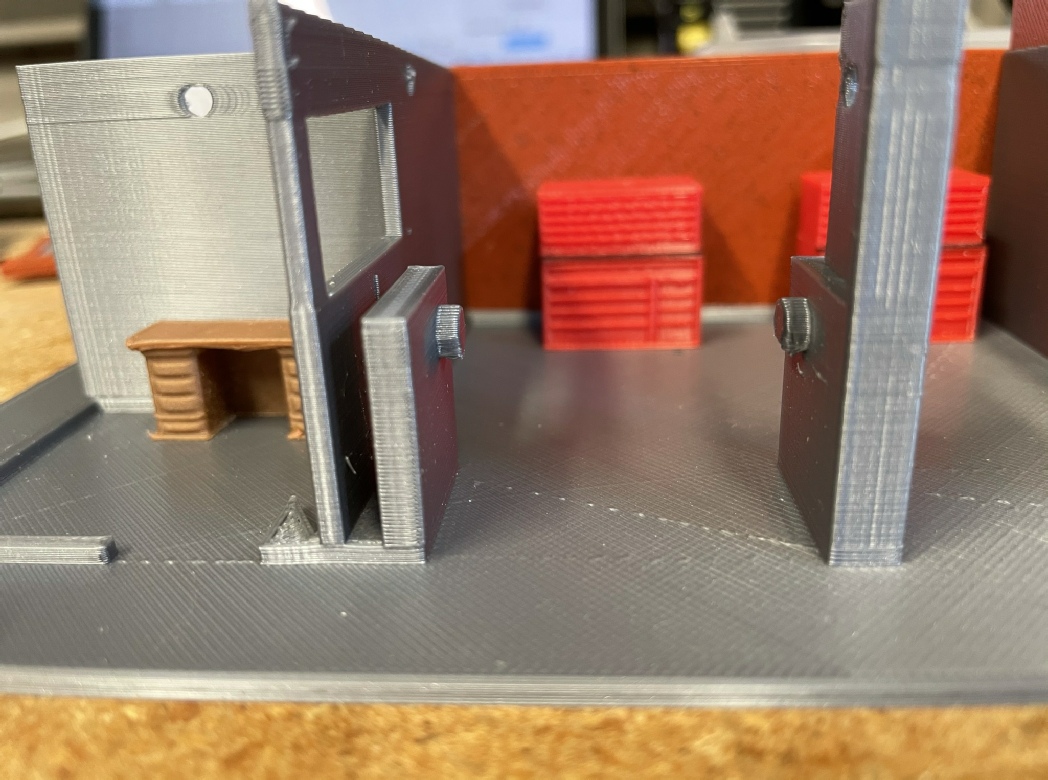 Some of the inner walls (in gray) have been installed and glued in to place. Two red tool boxes can be seen in the work stalls which are “Snap-On” tool box replicas that I scaled to size. The office desk was printed out using a special filament that is infused with a small amount of sintered wood which gives it the color and feel of real wood. 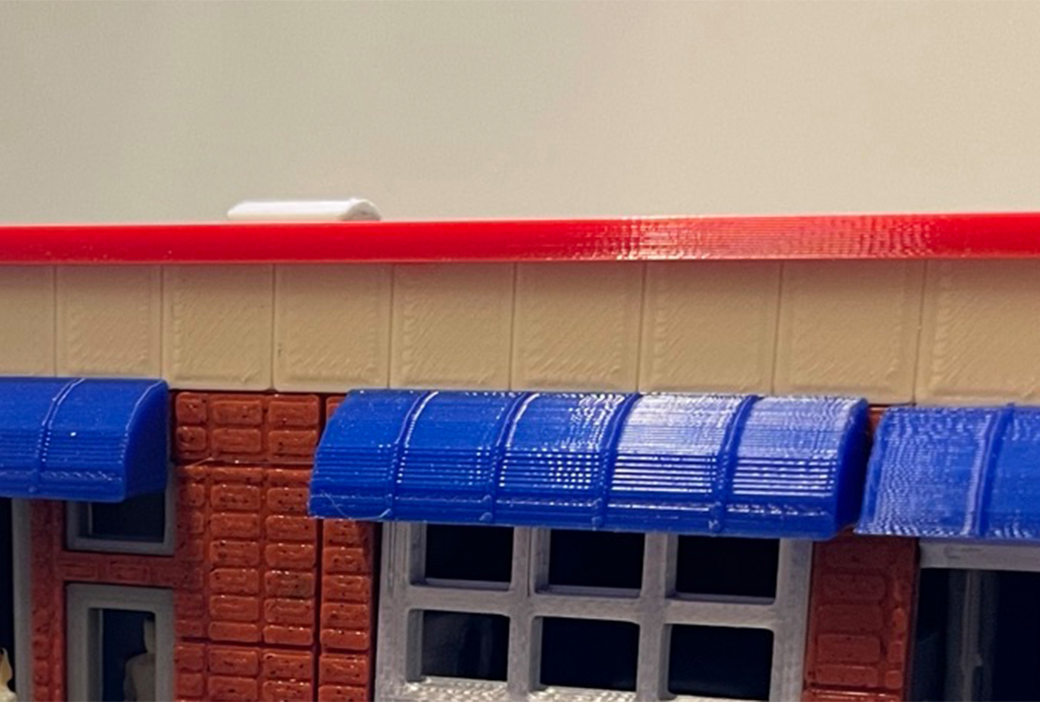 Designing the canopies that cover the work bays was a bit tricky and took a few iterations to get “just right”. 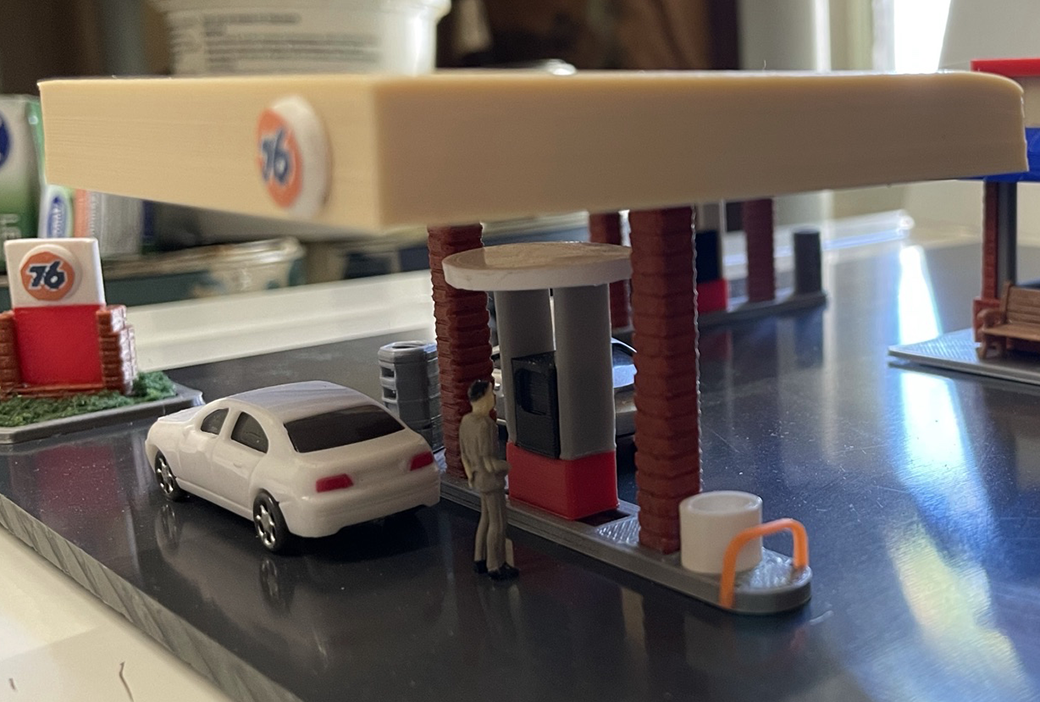 After completing the main building, I went to work on the gas pump islands. I purchased a large piece of black ABS plastic to emulate the asphalt and glued the various items to it. I also purchased some HO model train scale automobiles and figurines to add to the detail. The cars and figurines are too small to build with the 3D printer.

The “76” logo signs were made by printing a logo image downloaded from the web and re-scaling it to the correct size. I printed the images on plain white paper and pasted them to the signs.

Below are some images of the completed model: 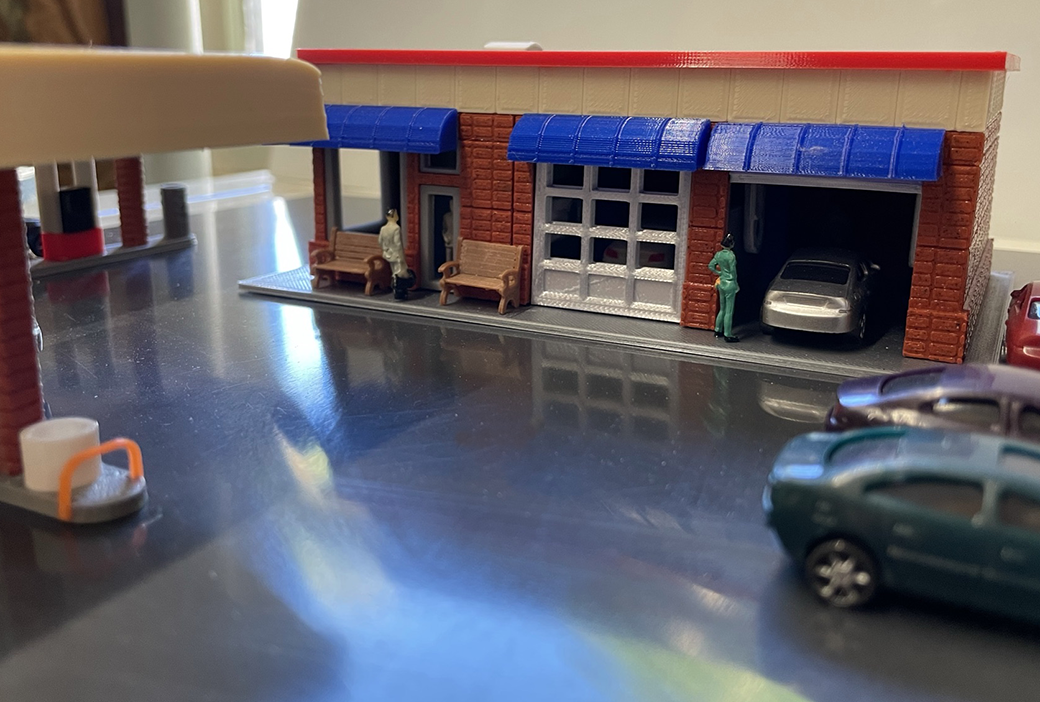 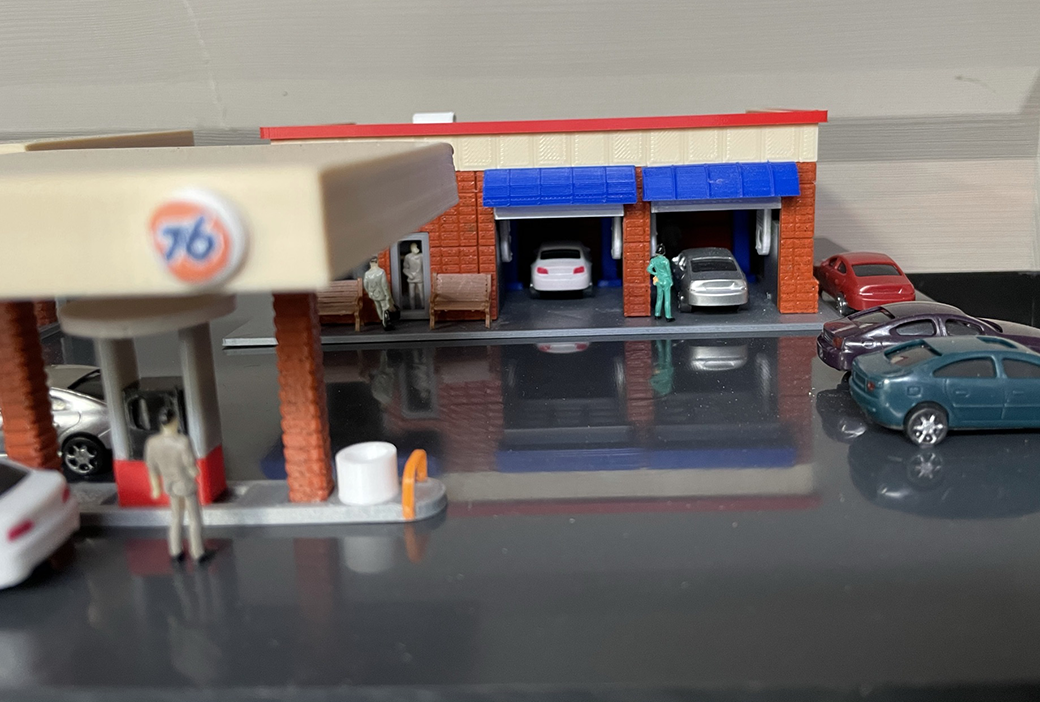 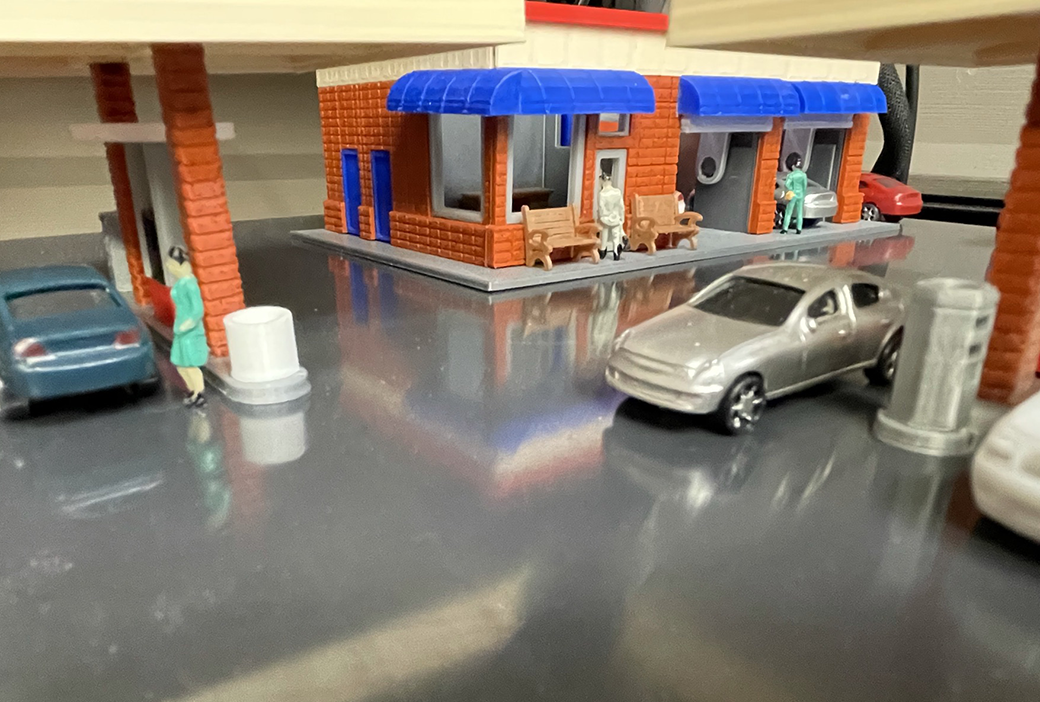 Although I didn’t keep track of how much time that I invested in this project, I would guess that it was at least 100 hours. After the model was completed, I took several photographs of it and then gave it to the good people at the Belmont 76 service station.