Let me preface this blog to let the reader know that I am by no means a skilled carpenter or contractor and there are many other (and probably better) ways to do a conversion like this. That being said, in the end, everything worked out very well and the conversion was successful.

The first step I did (and probably the most laborious) was to dig holes in the ground for the roll off roof support structure.

We live in Northern California and after digging through the first six inches of top soil, the ground is hard clay, which is difficult to dig out.

I measured the distance from the side of the shed to where the uprights would be located and dug out two holes approximately three feet deep. Fortunately for me, we never have ground freezes, so three feet was more than enough. 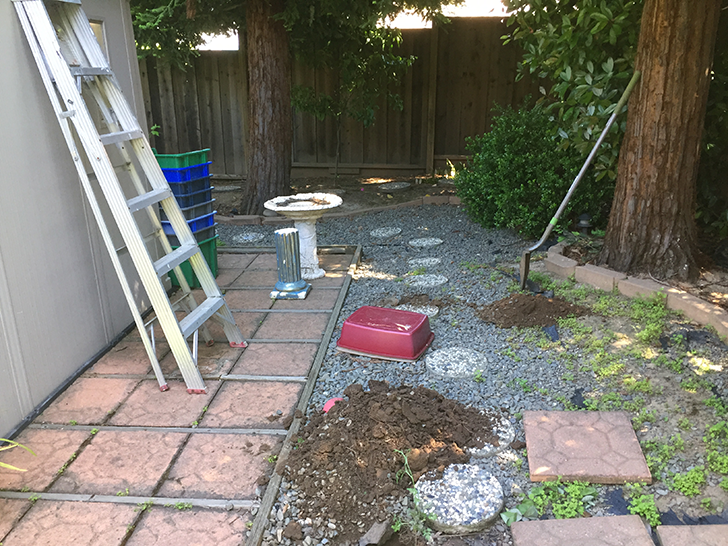 In my case, the Ketar vinyl shed I am using is a double wall construction and already has some very rigid steel reinforcement beams built in to the structure. Sadly, the newer Ketar sheds (and all of the other vinyl sheds I have looked at) are nowhere near as robust as this older one is. In any event, at the very least, the roof structure and walls will need to be framed in with wood to support the structure when the roof is rolled off. If the lower part of the structure isn’t well-supported, it would be advisable to “frame-in” the entire lower portion with wood reinforcements. In the case of the Ketar shed, by design the roof panel and part of the upper walls are held together with easily removable fasteners which made it fairly easy to separate the roof and upper wall portion from the lower walls. In the image below, the beige colored portion of the structure will be the base and the gray colored portion will be the roll-off portion. I framed in the upper part and the lower part with 2 x 3 beams. FWIW, no nails were used during the construction. I used wood screws for all of the assembly so in case I made any mistakes, it would be much easier to correct. I added the 2 x 3’s all around the perimeter of each sub-structure. 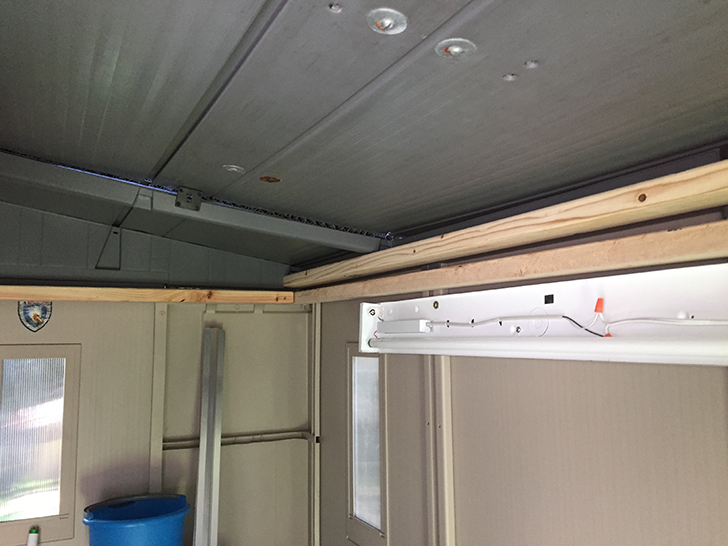 Because we live in a fairly hospitable climate, I’m not concerned with the possibility of wind blowing the roof off of the structure. Because of this, I decided to use V-Rails and V-rail rollers as a mechanism for the roof to ride on.

For those in less hospitable environments, using roll-up garage door tracks and rollers might be a better choice or at the very least, implement some sort of a lock-down mechanism to prevent the roof from blowing off in the case of high winds.

I purchased aluminum, inverted v-rails similar to this, although I believe I actually sourced them from a different (less expensive) vendor. https://www.alekoproducts.com/ALEKO-18-Feet-V-Track-Galvanized-Inverted-p/alv-track18ft-ap.htm

I found and purchased some (hard to find) extremely small rollers to try and keep the roof profile as low as possible.

I carefully aligned and mounted the V-rails along the top of the inner lower support beams. 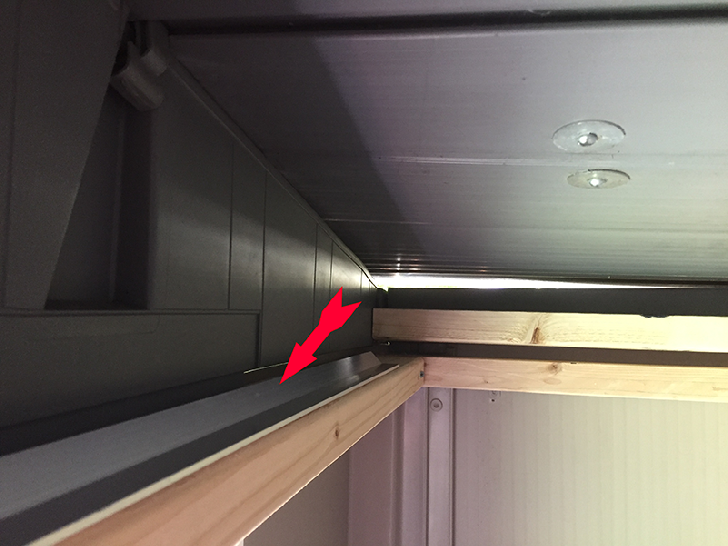 After completing the inner framing of the structure, I went back outside to work on the support structure.

I cut up a couple of small sections of wood to use as a temporary holders and mounted them to the side of the shed so that that the top of the wood block was even with the bottom of the inner rail support. Prior to this, I used a small saber saw to remove the sections of the vinyl shed that were in the prospective path of the roll off beams. Ultimately, I ended up installing full uprights from the ground up on the outside of the shed to support the cross-beams, so, in hindsight, I probably should have done that instead of installing the temporary blocks. No biggie.

Next, I carefully squared and aligned the pressure-treated 2” x 4” uprights along with the cross-beams making sure everything was as level and squared up as possible. Once I was satisfied, I mixed up two bags of Quikcrete and filled the upright holes with the concrete and said a prayer :-) 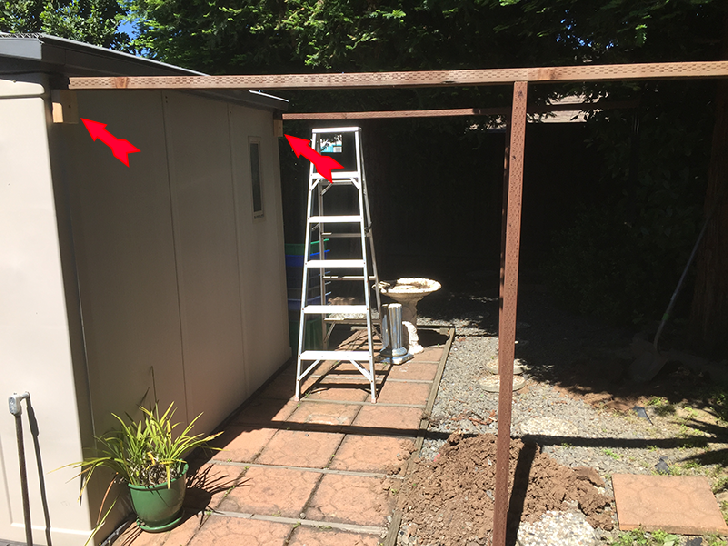 After letting the concrete set overnight, I installed a cross beam between the two outer uprights along with a couple of steel angle brackets to support the overhang portion of the roll-off support beams. I then installed the inverted v-rails on top of the outer supporting structure, making sure that they aligned with then inner v-rails as best as possible.

After everything was done with the outside support structure, I went back inside and jacked the roof up enough so I could install the v-rollers. I ended up installing three rollers on each side. (2 rollers shown in image).

The image below shows the gear rack installed, although that was actually done much later. 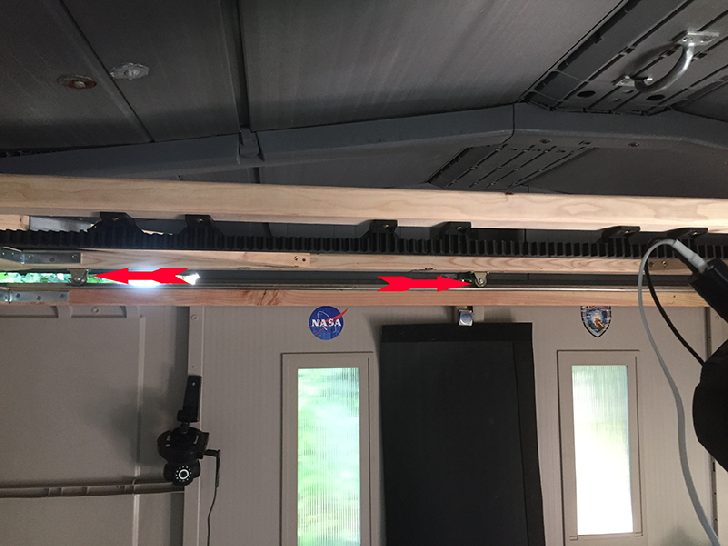 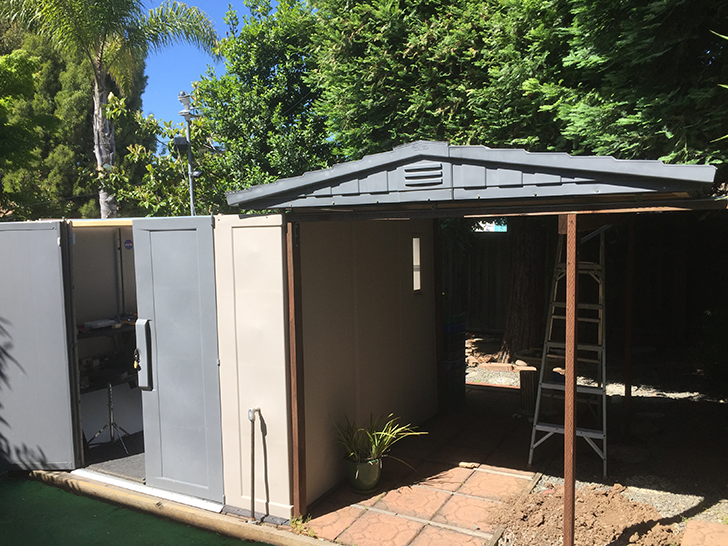 After moving the roof back and forth a few times by hand, I finished cleaning up a few things and added more screws to areas where I thought they might be needed.

With Phase 1 of the project completed, it was time to start the next phase of installing the roof motor and gear rack.

Although the roof motor can be mounted just about anywhere, I decided to mount it about a third of the way from the back wall of the shed. I could have mounted it all the way up against the back wall, but I was concerned that the uneven torque pull of the motor might cause the roof to derail. I’ve later been told that it would be extremely unlikely, but it actually is fine where it is. It’s nowhere near the telescopes and isn’t anywhere where I might bang my head on it on a dark night. I cut up a 2 x 3 and made a “picture frame” style mounting for the motor. One of the reasons I had decided to mount the motor where I did is because the Ketar shed has a large steel support beam running vertically through the wall in that area which would lend additional support strength for the motor. I drilled holes through the “picture frame” mount and in to the steel support and installed screws there and also drove a few screws from the top of the cross-member in to the “picture frame” mount. It’s plenty sturdy. If the steel support wasn’t there, I would have added supports that extended down to the floor of the observatory as the motor needs to be very securely mounted.

After mounting the motor, I installed a crosswise spar to mount the gear rack to using angle brackets on both sides of the spar. The gear rack has a lot of built-in adjustability to it so after you install it, you can loosen the mounting screws and move it around to in order to get the proper gear lash and mesh. It’s a nice feature.

I chose an Aleko™ brand AR900 sliding gate opener for this job. This motor is capable of moving a 900 lb. sliding gate and is more than powerful enough to move the roof. I estimate the total weight of the roof to be about 200 lbs. 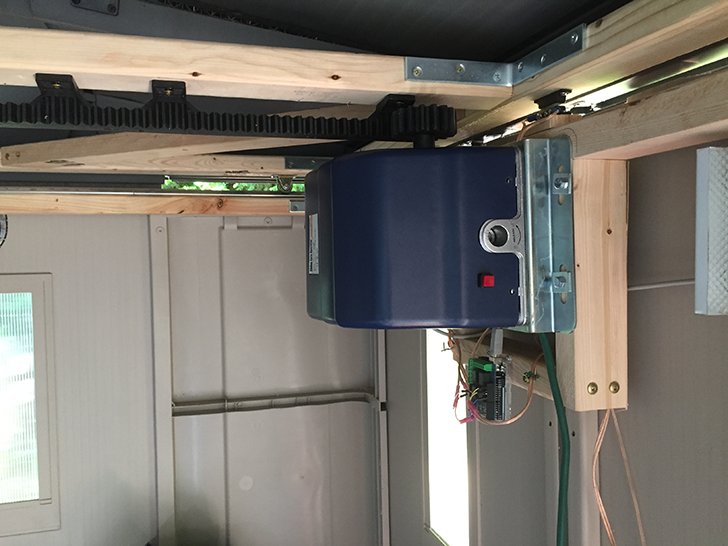 I needed to make a few minor alterations and modifications to the roof motor to suit my needs. By design, the unit uses two moving magnets to detect the end points of travel of the system. The moving magnet sensor is mounted on an aluminum plate inside of the motor housing which is not very convenient for this type of installation. I simply removed the screws that hold the sensor to the bracket, spliced an additional length of wiring to the existing wires and mounted the sensor on top of the lateral cross beam as shown in the pictures below.

Be advised that this is a separate moving magnet system than you’ll need if installing a SkyRoof system.

It’s best practice to install the Aleko system first and get it dialed in before installing a SkyRoof (or other) automation control.

The other minor modification made was to install a push button control on to the motor cover so the motor can be operated locally. Although the Aleko motor comes with radio operated remote controls, it seemed easy enough and handy to add a push button. 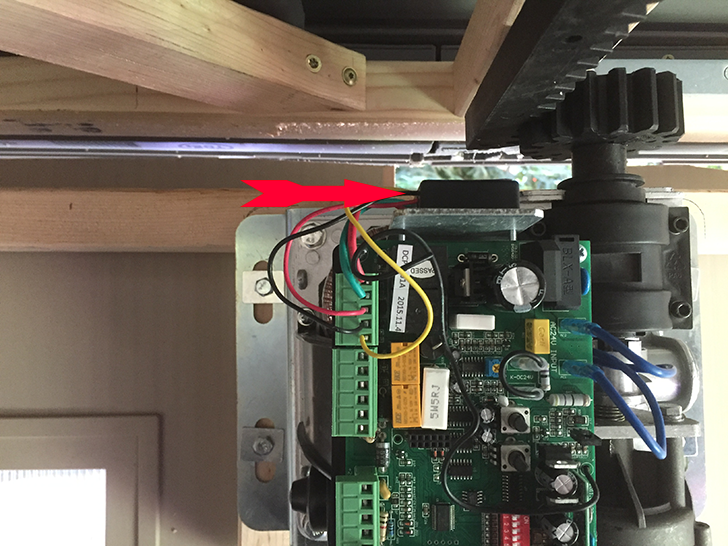 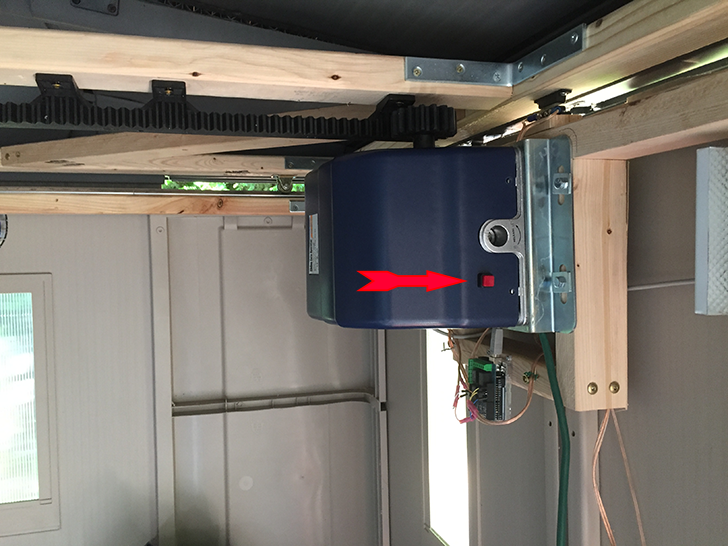 I purchased a normally open momentary spring loaded push button at the local (now defunct) Radio Shack store so I could operate the motor from within the observatory without using the remote or computer.

After installing all of the motor magnets, I operated the roof several times and made adjustments to the location of the moving magnets and the gear rack to get everything just right before moving on to the final phase of the project which would be to install the SkyRoof system.

The SkyRoof system is relatively simple to install. Basically, there are two magnets, two magnetic sensors and a few wires to connect. If your observatory/telescope configuration is such that it is possible for the roof to collide with the telescope, then an additional “AtPark” safety system should be installed as well. Below, the arrow is pointing to the “Closed” magnetic sensor and magnet. In my case, it was convenient to locate the “Open” magnetic sensor on one side of the motor and “Closed” magnet on the other side of the motor so as to avoid stringing wire across the observatory. YMMV.

After both SkyRoof magnets and sensors have been installed, you’ll need to adjust the magnets so they register properly. With the SkyRoof program up and running and the wiring connected, make sure that the sensors are registered properly by looking at the SkyRoof GUI as shown. When the roof is fully closed, the “Closed” icon should be displayed in green and when the roof is fully opened, the “Open” icon should be displayed in green. Adjust the location of the magnets and sensors so always they register properly after repeatedly opening and closing the roof. 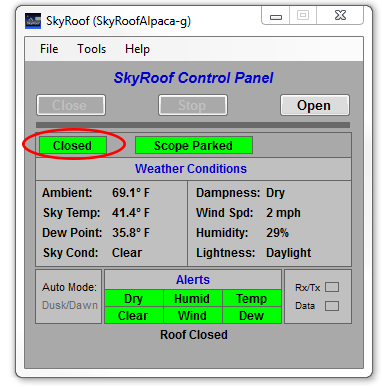 Installing the “AtPark” system, is very simple. Just pick a suitable (and solid) location to mount the AtPark sensor in a place where it can be pointed to the nose end of your OTA and attach it with the provided screws.

Install the AtPark reflector on the nose end of your OTA and connect the system, to power. Adjust the sensor so it registers parked when the OTA is in the parked position.

I won’t go into any of the SkyRoof and AtPark wiring connections in this blog as they are outlined elsewhere and the can vary depending on you particular setup. 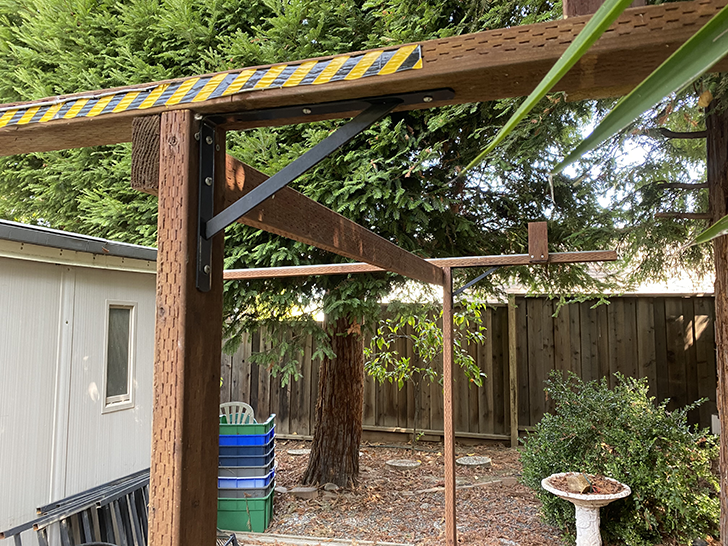 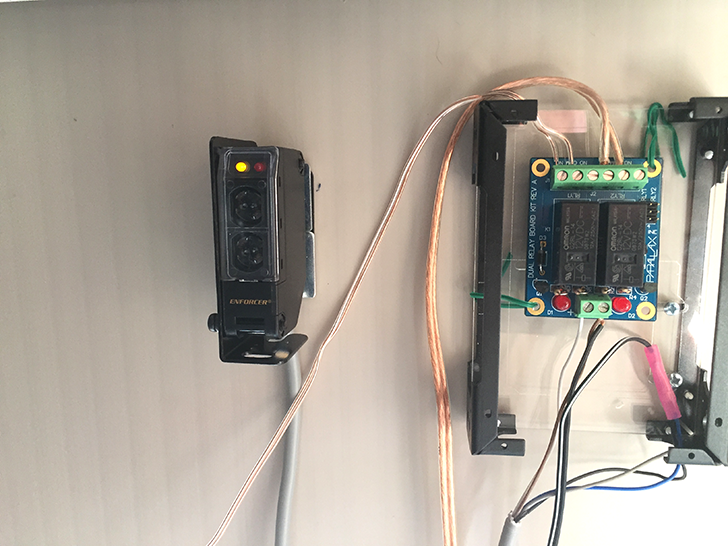 Here is a close up view of the motor at work:  URL: https://www.youtube.com/watch?v=0Yo-xPthtA0

While this all sounds like a lot of work, it actually only took about three days to complete, start to finish. And a lot of that time was used up going back and forth to the local Home Depot store.

I actually enjoyed doing this project and having an automated roll-off roof is a real luxury. Now if I could just get some clear weather!

Additionally, I purchased garage door seals from Home Depot and installed them around the perimeter to cover the gap between the moving roof and the observatory housing to prevent wind blown debris and such from entering the observatory. 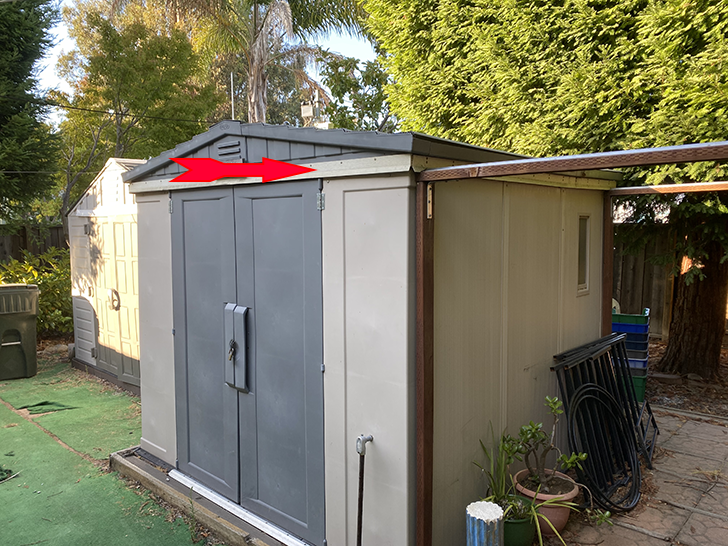