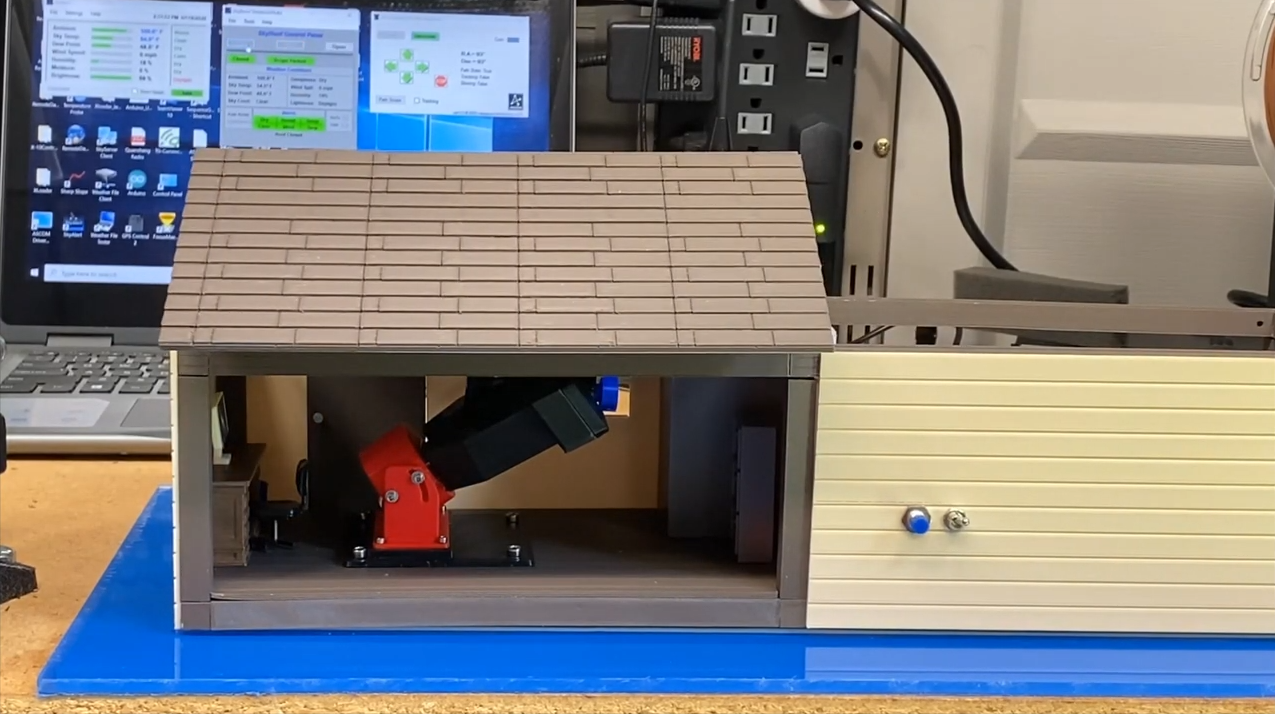 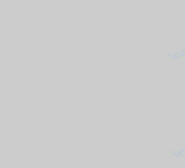 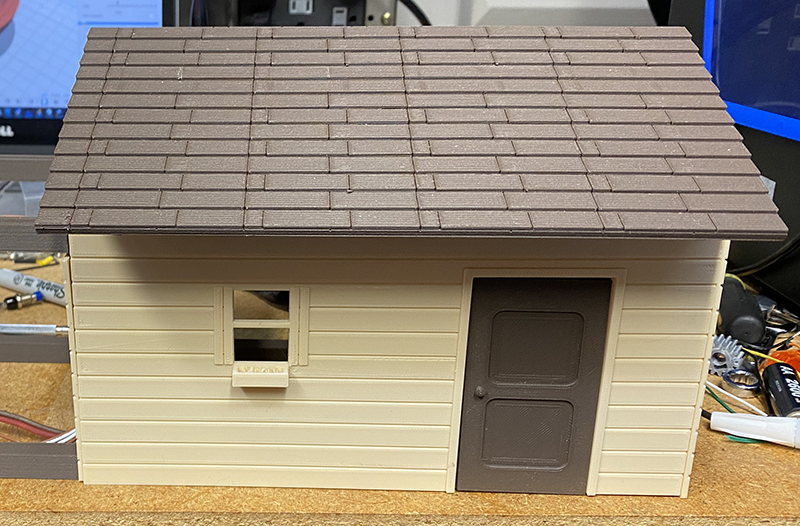 Designing, building and programming the observatory model was an ambitious project that took nearly four months to complete. All of the component parts of the model were designed using AutoDesk’s “TinkerCad” program and subsequently printed out with a 3D printer.

The roof, doors and floor were printed using a special material that contains sintered wood along with plastic to give the parts the look and feel of real wood.

One of the more difficult aspects of designing the model was trying to get all of the parts to a common scale. This turned out to be a bit more difficult than I had thought it would be due to having to make room for servos and other components that are only available in certain sizes. For the telescope drive, I used the smallest servos that I could find which are GH-S37A servos designed for R/C airplanes and helicopters. This turned out to be one of the limiting factors and as such, all of the other parts of the model had to be scaled around the servo size. The original design was to construct an equatorial type mount for the telescope but due to size and scale limitations, I opted to construct a fork mount instead. 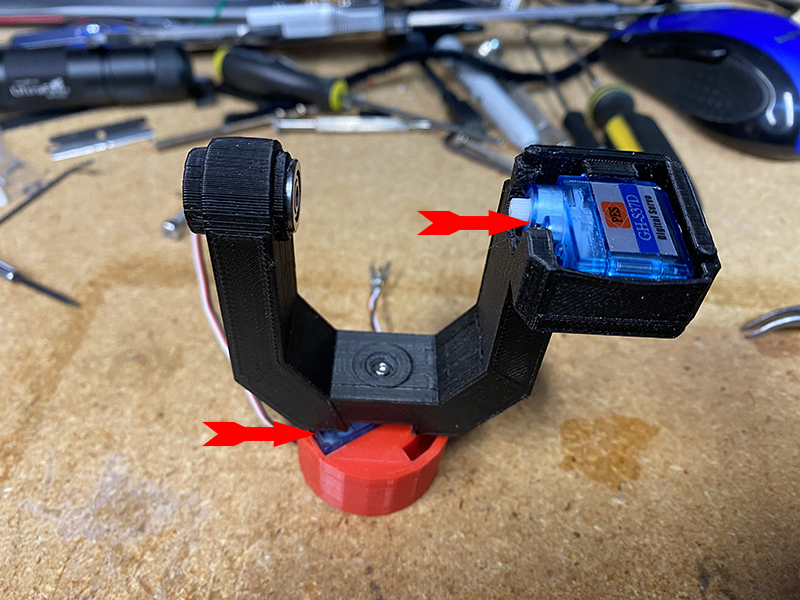 The servo that moves the altitude axis of the model directly drives the scope model via a special mounting plate.

To accommodate the wiring, the right fork arm was designed as a hollow object. In the left arm of the fork, a ball bearing set supports the opposite side of the scope via another mounting plate.

In the base of the mount the azimuth servo directly rotates the fork mount. The mounting base has a slot designed in it to accommodate the wiring for the servos. 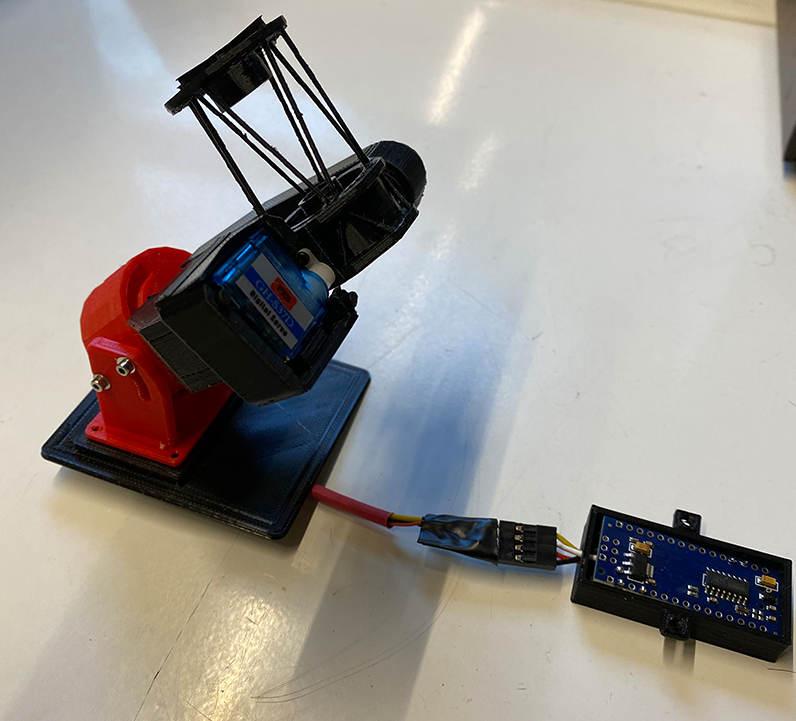 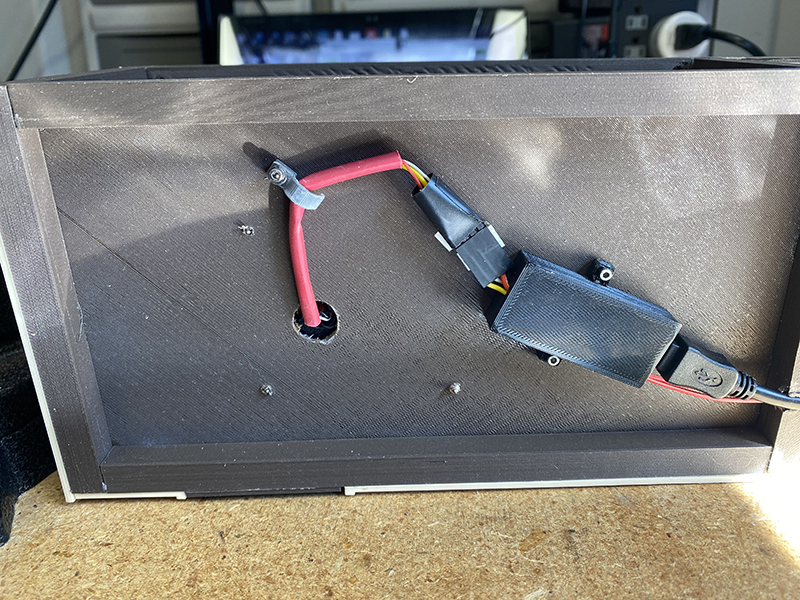 The Arduino Nano was programmed to accept and issue motion commands based on the de-facto standard Meade LX-200 protocol. A special Windows™ based ASCOM software driver was also developed to allow the scope motions to be controlled by any ASCOM compliant telescope mount software via the Nano’s USB/serial port connection. The mount even tracks the sky in real time, although not very accurately.

The roof mechanism is driven by a 100 RPM DC motor which drives a rack and pinion attached to the sliding roof. The roof motor is driven by a motor controller driver which is controlled by another Arduino micro-controller programmed to move the roof in the proper direction. The logic in the program operates the roof in the same fashion as a typical push button garage door opener does. The first push of the button opens the roof, the next push closes the roof. If the button is pushed when the roof is in motion, the roof stops and the next push of the button will move the roof in the opposite direction. A speed ramping routine was also written in to the code to prevent any jerking motion when the roof stops or starts moving. 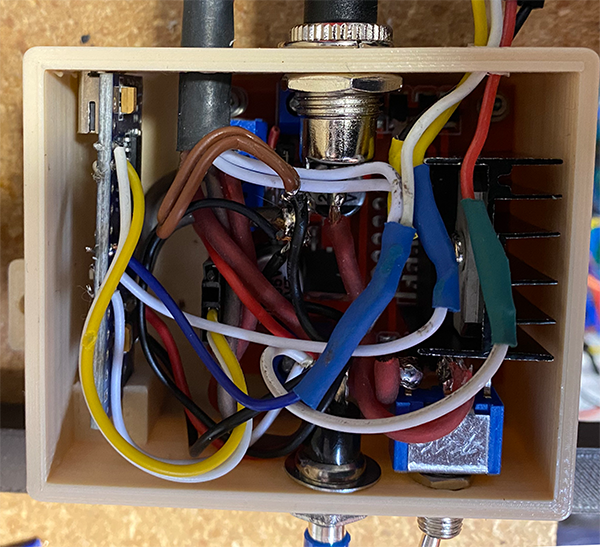 In hindsight, I should have built a slightly larger enclosure to house the driver and Arduino controller. Assembling and soldering the connections was like building a ship in a bottle. On the front side of the enclosure (bottom of photo) is a main power switch along with a push button switch to operate the roof motor manually. 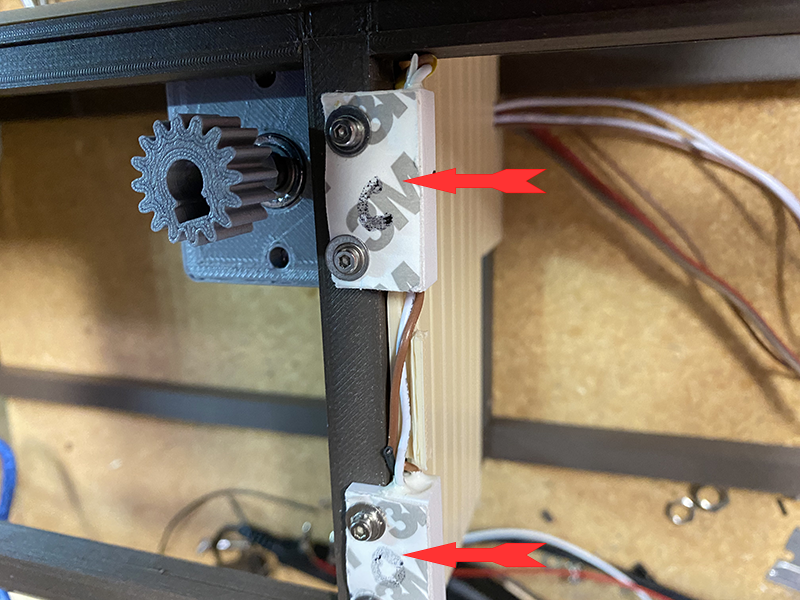 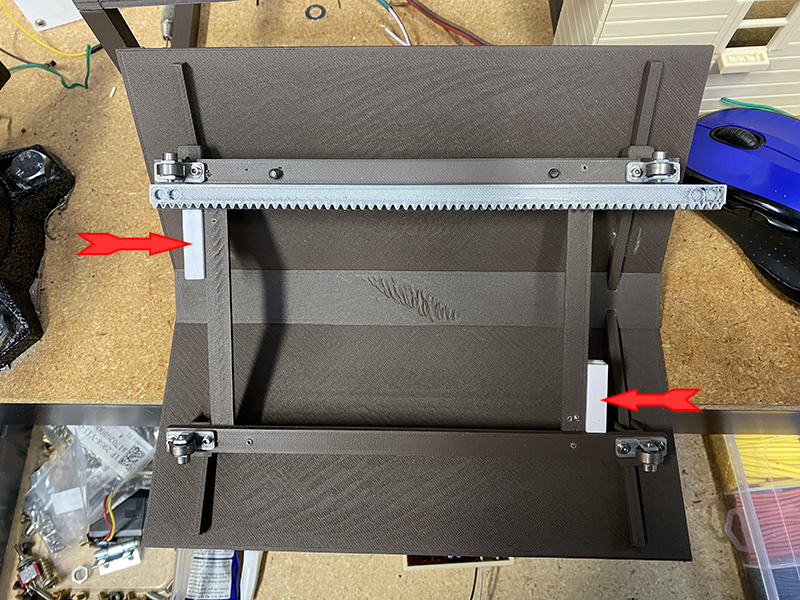 This is the underside of the rolling roof structure. The moving magnets are denoted by the arrows. Also shown are the roof rollers (which are actually very small ball bearing sets) and the gear rack that the motor drives. The roof rollers ride in slots on the top surface of the frame structure. 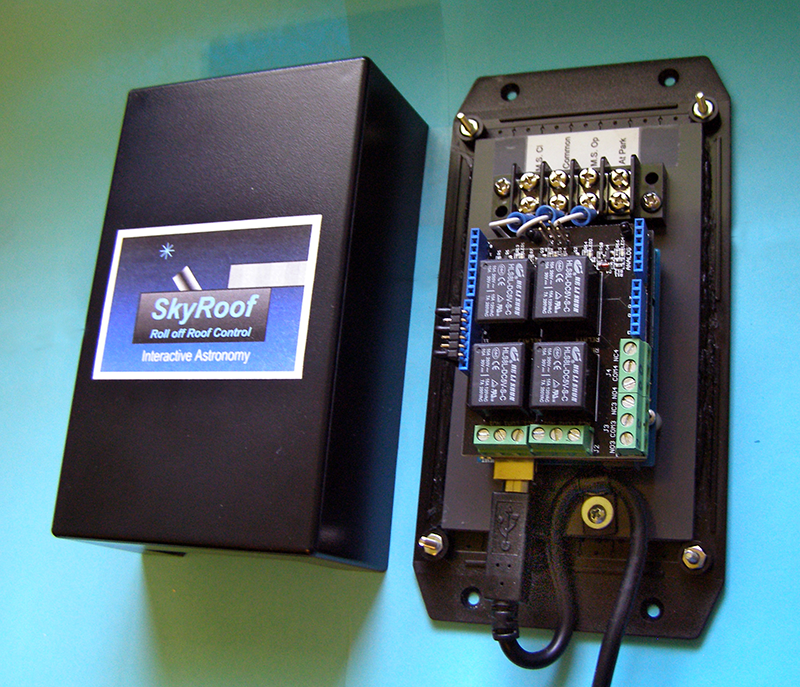 The system is controlled by an off the shelf SkyRoof controller which sends the signals to open and close the roof and to park the scope when necessary. 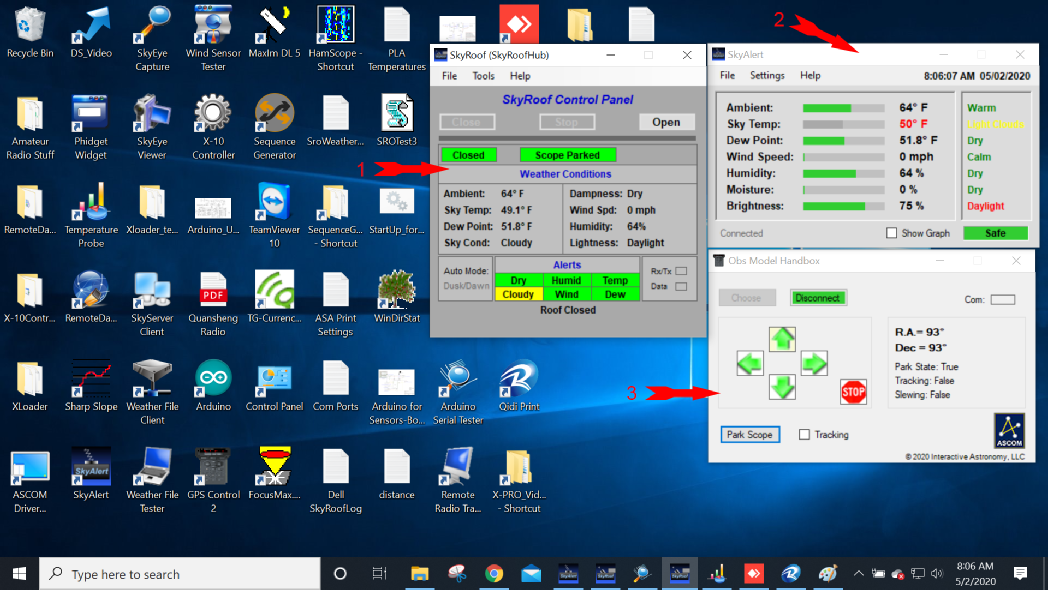 The screen shot above depicts the various software programs being used.

(1) SkyRoof Control Panel-allows user to open/close the roof at will and also reads the “weather file” produced by the SkyAlert program.

(2) If the SkyAlert system detects poor weather or other adverse conditions, the SkyRoof program will park the scope (if necessary) and close the roof.

The Obs Model Handbox (3) is an ASCOM compliant custom program that controls the scope movement. It can also park the scope and turn the scope tracking on or off.

Although the schematic wiring diagram may appear complex, the interconnecting wiring between the modules (separated by red dashed lines) is actually fairly simple and uses a minimum amount of wiring. 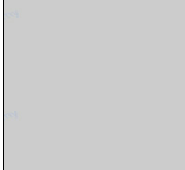 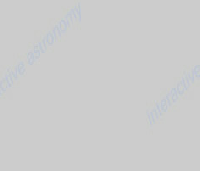 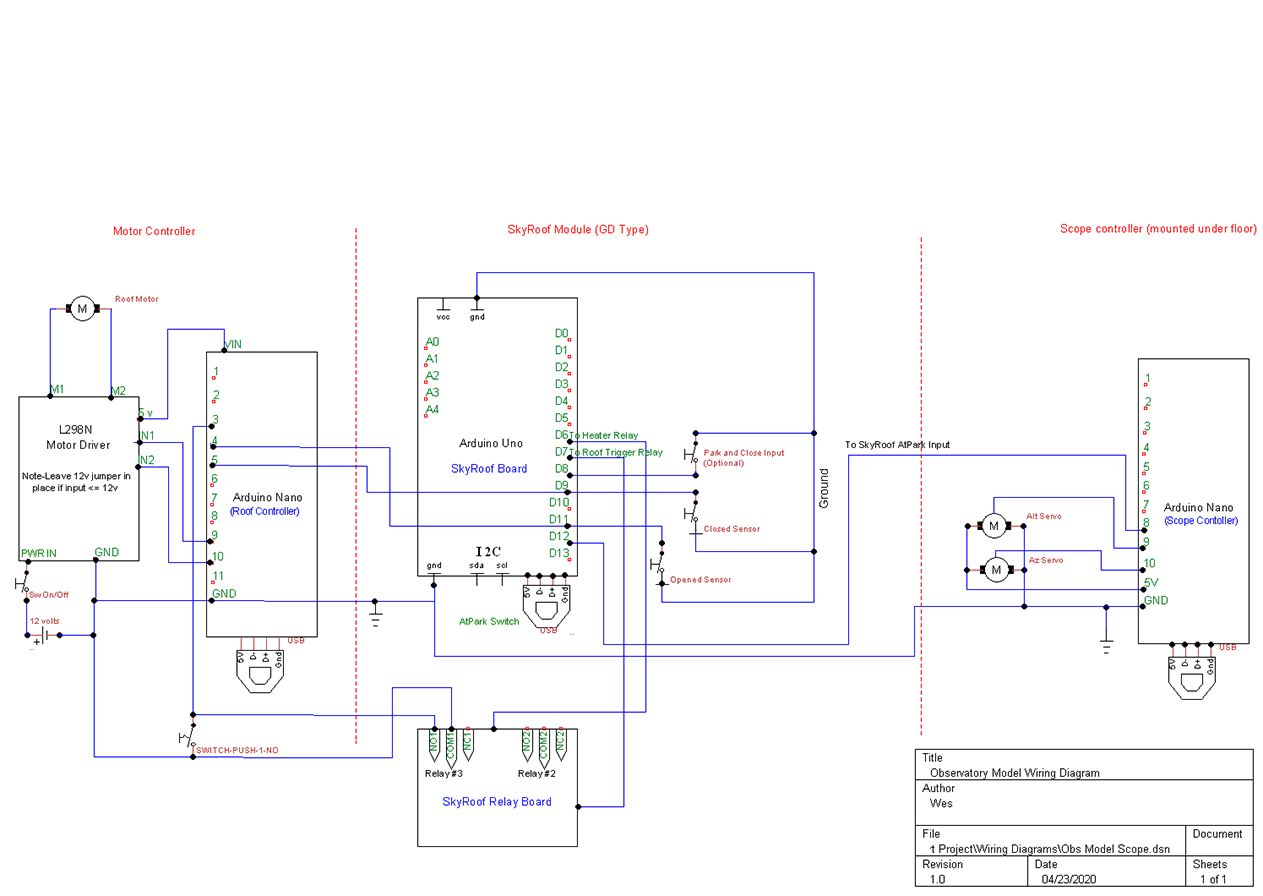